Cezanne Khan is an Indian actor best known for playing the role of Anurag Basu in the drama series ‘Kasautii Zindagii Kay.’ He has also acted in a couple of Pakistani and middle east Asian television series.

Cezanne Khan was born on Wednesday, 28 December 1977 (age 44 years; as of 2021) in Mumbai, Maharashtra, India. His zodiac sign is Capricorn. He attended Barnes School & Junior College, Deolali, Mumbai for primary and secondary education. Later he got himself enrolled at the M.M.K. College of Commerce & Economics, Mumbai to earn a bachelor’s degree in commerce. During his college days, he was involved with modelling and theatre. After Cezanne finished his B.Com, he was supposed to join NMIMS (Narsee Monjee Institute of Management Studies) for MBA when he was offered a film. This film never released, but it served to prompt him leave his MBA to pursue a career in acting.

His father’s name is Ustad Rais Khan and he is a popular Sitarist. His mother’s name is  Tasnim Khan and she is an Interior designer. He also has a younger brother, Sohail Khan, in his family, who is a professional singer.

His maternal family stays in Karachi and he had gone there to meet my relatives.bb

Cezanne Khan was rumored to be dating Naushin Rehman aka Nashu, a Pakistani Pilot, engaged in 2011 but later broke the engagement due to distance relationship.

He fell in love with her after she cooked a delicious biryani for him, after which the actor couldn’t resist proposing to her for a deal of the lifetime. The Kasautii Zindagi Kay recalled how a common friend of them introduced her to him. He said,

The guy who introduced us was all praise for her culinary skills. Now, I have travelled all around the world and have tasted various cuisines, so I didn’t have any expectations. But she stumped a foodie like me with her biryani. Post dinner, I proposed to her and told her I like her and would want to eat the food she makes all my life (laughs!).”

In an interview, Cezanne Khan opened up about his relationship with his longtime girlfriend, Afsheen, and said,

Talking about his marriage plans, he siad,

We have been together for three years now and are happy. Had it not been for the pandemic, we would have been married by now. We plan to tie the knot later this year. Anyway, I feel there is no perfect age to get married.”

Cezanne Khan made his acting debut in 1998 with Zee TV’s drama serial ‘Hasratein.’ It was directed by Ajai Sinha and featured Seema Kapoor, Shefali Chaya, Harsh Chhaya, and Dharmesh Vyas in lead roles. Cezanne played the character of Yogesh in the drama serial. In 1999, he became part of Neena Gupta’s television drama series ‘Pal Chhin.’ He portrayed the character of  Rajesh opposite Manohar Singh, Gurpreet Singh, Arun Govil, Prabha Sinha, and Shilpa Tulaskar. Cezanne Khan got the breakthrough of his career in 2001 with StarPlus’ family drama series ‘Kasautii Zindagii Kay.’ He got the opportunity to play the lead character of Anurag Basu opposite Shweta Tiwari who played his love interest Prerna Sharma Basu. The drama series received huge appreciation from the audience and Khan became a household name in a very short span of time. This Ekta Kapoor’s Balaji Telefilms produced drama serial became the longest running television show of StarPlus. The Kasautii Zindagii Kay had more than fifty sound tracks during its airing from 2001 to 2008. Cezanne’s acting in the show received huge critical acclaims and he was also awarded with a number of awards including Indian Television Academy Awards for Best Actor Popular and Indian Telly Awards for Best TV Personality-Male.

In 2002, The Kasautii Zindagii Kay also featured in Sony Entertainment Television’s thriller anthology television show ‘Kya Hadsaa Kya Haqeeqat’ as Kunwar Sujit Singh. He along with Hiten Tejwani, Smriti Irani, Gauri Pradhan, Rajeev Khandelwal, Ashlesha Sawant, Sumeet Sachdev, Shweta Tiwari, and Narayani Shastri became part of the special series of the drama titled ‘Kab Kyon Kahan.’ Later in 2006, he took the opportunity to work in Pakistani television industry and marked his debut with ARY Digital’s ‘Piya Kay Ghar Jana Hai.’ The drama was also telecasted in India at StarPlus. Following this he became part of a number of Pakistani and middle east drama and almost vanished from the telly scene in India. Denig the fact, he explained,

Actually I am doing shows for middle eastern countries and all my shoots happen in Dubai. These shows have kept me busy for the past four to five years. I fly to Dubai for shoots every three weeks or so and at times shoots go on for six months non-stop.”

He made a comeback on Indian television with Maqbool Khan directed drama series ‘Seeta Aur Geeta’ that aired on NDTV Imagine from 25 May 2009 to 25 September 2009. Cezanne played the character named Ravi in this 260 episodes series.

The Kasautii Zindagii Kay fame actor received recognition as an actor in Pakistan with Gumrah, a Pakistani romantic drama serial. He got to share the screen with actors like Faisal Rehman, Sabreen Hisbani, Komal Aziz Khan and Hammad Farooqui. In an inter, when asked about his decision to work in Pakistani televison industry as well, he said,

Log jaante jaan ne lagte hain aapke kaam ko jab woh sab aapke shows dekhte hain. Fortunately, the first offer came my way during the peace initiative that happened between India and Pakistan. I was never in two minds before I gave a nod to these offers. I was excited by the roles than the countries I had to work for.”

Although, Cezanne and Shweta Tiwari were popular on-screen couples of ‘Kasautii Zindagii Kay’, but according to the reports they had a constant cold-war and never get along well with each other during the course of the serial. When, during a media interaction, he was asked about would he be willing to work with Shweta Tiwari, his co-star in ‘Kasautii Zindagii Kay’ considering the fact that there were rumours of the duo not getting along well. He said,

If the offer is interesting, I wouldn’t mind working with shweta tiwari again. A lot depends on the shows.” 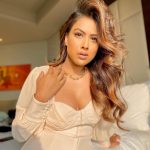