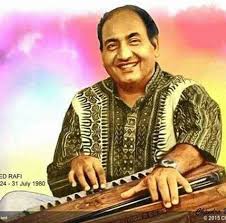 Mohammed Rafi was an Indian playback singer in film industry, he was grandmaster and greatest singer in India. He married with two wife one of the name of his wife ‘Bilquis Bano’ and six children were born by them. Before the partition of India his family lived in Pakistan then he moved in Mumbai for singing. In 1980 the famous singer was died due to cause of heart-attack in the age of 55 years old only. On 24th December in India celebrated his birthday with full of joy.

In Lahore his first debut songs with Zeenat Begum as a playback singer “Soniye Nee, Heeriye Nee” in Punjabi film ‘Gul Baloch’ was released in 1944.

Rafi was started his career through hindi film “Gaon Ki Gori” as a play back singer after moved in Mumbai in 1945.

Including hindi songs he also sung in other languages including English, Farsi, Arabic, Dutch and Sinhalese.

1962-1963— Famous female singer Lata Mangeshkar raised the issues of playback singer’s share in the royalties. Recognizing Rafi’s position as the leading male playback singer, she wanted him to back her in demanding a half-share from the 5% song royalty that the film’s producer conceded to Select Composers.

Royalty problem makes the problem between the two famous singers, after the clashed of royalty then she decided not to sing a song with Rafi, but the music director talks for to neglect all the disputes between the two singers.

2012- The Times of India news portal covered the interview of Lata Mangeshkar in which she claimed that had a written apology given by Rafi, but Mohammed Shahid Rafi as a son of Rafi refute all the claim, and calling it she dishonour  his father’s reputation.

Rafi was born in Punjab, Pakistan (british India), he was the second son out of the six brothers, he was inspired first time when he heard the voice of Fakir baba who roamed in his village.

Then he decided learnt a classical music under the Ustad Abdul Wahid Khan, and started sing a song first time in public in the age of 13. Later he got offered to work in All India Radio Lahore station as a singer.

He also met in bombay with famous boxer Mohammad Ali.

In 1944, he moved in Bombay (Mumbai), and met with film producers including Abdul Rashid Kardar and director Nazeer.

He got opportunity to sing a song in film Gaon Ki Gori (1945) – “Aji dil ho kaabu mein to dildar ki aisi taisi” and recorded other songs with Naushad like “Hindustan Ke Hum Hain”.

Rafi performed Namaz (salah) with his brother in Masjid

He is very fancier in dressing up and luxury cars to buy after the fame.