Paaras Madaan is an Indian model and actor who is popular for appearing in the Indian television series Qubool Hai (2012), Nisha Aur Uske Cousins (2014), and Beyhadh 2 (2019).

Paaras Madaan is an Indian model and actor who is popular for appearing in the Indian television series Qubool Hai (2012), Nisha Aur Uske Cousins (2014), and Beyhadh 2 (2019).

Paras Madaan was born on 9 March in Faridabad, Haryana. His zodiac sign is Pisces. Spending his childhood in the cricket-crazy city of Faridabad, Paaras grew an interest in the game. Therefore, he started training at a cricket academy to enhance his skills during his school days.
He attended the University of Delhi.

Not much information is available about his parents. His sister’s name is Richa Madaan.

On 11 December 2021, Paaras Madaan got married to Soumita Das, who runs a productions house, in an intimate wedding, which was held at a gurudwara. A civil engineer, Soumita previously worked as an actress in Bengali TV shows. Paaras and Soumita first met in 2018 when Paaras was working in the production house headed by Soumita. Soon, they started dating. On 7 March 2021, the couple’s engagement ceremony was held at Mayfair Tea Resort in Siliguri, West Bengal.

Paaras Madaan was born in a Punjabi family.

Paaras Madaan started off his career as a theatre artist in Delhi. To pursue a career in the television industry, he moved to Mumbai in 2008. He made his television debut with a minor role in ‘Kis Desh Mein Hai Meraa Dil’ (2008), which aired on Star Plus.

After making small appearances in Star Plus’ Kis Desh Mein Hai Meraa Dil (2008) and Zee TV’s Keshav Pandit (2010), he came into the spotlight after playing the role of Anwar Khan in the Indian soap opera ‘Qubool Hai,’ which was broadcast on Zee TV. In the show, Anwar Khan is Sanam’s (the protagonist) ex-fiance and a businessman who is settled in Punjab.

In 2014, he appeared in Bindass’ romantic anthology series ‘Love By Chance’ in which he played the role of a typical Delhi boy named Mihir in the episode titled “Mujhe Shaadi Se Bachao.” In the episode, Mihir, who hates the concept of arranged marriage, is tricked into meeting a girl named Gayathri by his parents. After a series of mind games to outwit each other, Mihir and Gayathri fall in love.

Paaras Madaan in Love By Chance

For a few Diwali special episodes, Madaan played a comic role in the situational comedy television series ‘Chandrakant Chiplunkar Seedi Bambawala,’ which was telecast on SAB TV. In the episodes, Paaras appeared as Will, an NRI friend of the Suhasini Gangaram Chiplunkar. Paaras Madaan became a household name after starring in Star Plus’ coming of age romantic drama television series ‘Nisha Aur Uske Cousins’ (2014). In the show, Paaras played the role of Dolly’s jealous and wilful husband, Sumit. Before Madaan bagged the role of Sumit, it was played by the Indian actor Tarun Singh.

In the same year, he essayed a cameo role in Sony PAL’s ‘Hamari Sister Didi.’ The show follows Amrita, a head nurse in Muskaan Hospital at Patiala who is fondly called Sister Didi and how she showers love and affection to her patients. In the show, Paaras played the role of an NRI guy named Aman, a rich brat who loves to shop and is married to Amrita’s childhood friend Jaspreet. In 2016, he took part in the second season of the Indian sports reality television show ‘Box Cricket League.’ In the show, Madaan was a member of Sunny Leone’s team, Chennai Swaggers.

In 2017, he played the role of Jaidev Rajdheer Das in Colors TV’s television drama ‘Laado 2.’ In the show, Jaidev is the youngest and optimist son of Saroj, Amaaji’s friend.

In the 2019 Indian supernatural drama ‘Divya Drishti,’ Paaras played a character with a feminine touch named Bichhu (Scorpion), the main antagonist’s helper. The show aired on Star Plus. He gained immense popularity for playing the role of Rajeev Chandra, a close bisexual friend of the protagonist, Maya, in the Indian romantic thriller television series ‘Beyhadh 2′ (2019). A computer expert, Rajeev Chandra serves as Maya’s associate and partner-in-crime in the show.

He has also starred in the web series ‘Wolf of Bollywood’ (2018) and Gandu (2019), which streamed on the Indian on-demand streaming platform ULLU. In 2020, he secured a role in the web series ‘Hastinapur’ produced by Apex Digital World and PM Production (helmed by Paaras and  Soumita)

In 2017, he started appearing in the film based review show’2TicketzPlzz’ on a YouTube channel of the same name. In the show, Paras Madaan and Imraan Lightwala host a section titled ‘5 Point Nonsense’ wherein they humorously present some nonsense facts about a film. As a model, Madaan has featured in commercial advertisements for several recognised brands like MTV, Tata, and Nestle Eclairs. In March 2020, he modelled for ethnic clothing brand Fatiz at a fashion show that was held in JW Marriott, Mumbai.

Along with his wife, Soumita, he established the production company named “PM Production” in 2020. The production house made its debut with a web series named ‘Hastinapur’ produced in collaboration with Apex Digital World. 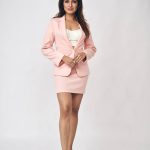