Pankaj Bhadouria is an Indian chef who became the first winner of the Indian cooking show MasterChef India Season 1 in 2010.

Pankaj as a child

Pankaj as a youngster

A collage of Pankaj’s picture with her father

Pankaj as a youngster with her mother

Pankaj with her brother

Pankaj with her husband

She has two kids, a son, Siddhant Bhadouria, and a daughter, Sonalika Bhadouria who is a social media influencer.

Pankaj with her son

Pankaj with her daughter

Before choosing her career as a chef, Pankaj worked as a teacher for sixteen years at City Montessori School, Lucknow.

Pankaj started her cooking career in 2010 by appearing on the first Indian cooking show ‘MasterChef India Season 1’ on Star Plus. She became the winner of the show.

In 2012, she started her own culinary academy ‘Pankaj Bhadouria Culinary Academy’ in Lucknow. The academy provides professional and certificate courses.

She also opened the cafes Tramp Tree Cafe, and Cafe by Default in Lucknow.

Pankaj wrote her first cookbook ‘MasterChef India Cookbook’ in 2011. She later wrote other cookbooks that include Barbie- I am a Chef, Chicken From My Kitchen, and The Secret’s in the Spice Mix.

Pankaj’s cookbook ‘The Secret’s in the Spice Mix’

Pankaj in the commercial of Reliance Fresh 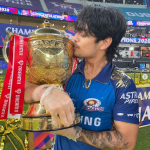