Raghav Juyal is an Indian dancer, choreographer, actor, and television host. He rose to fame after participating in season 3 of the dance reality show “Dance India Dance Season 3.” He is popular with his stage name “Crockroaxz” and is also known as the “The King of Slow Motion.”

Raghav Juyal is an Indian dancer, choreographer, actor, and television host. He rose to fame after participating in season 3 of the dance reality show “Dance India Dance Season 3.” He is popular with his stage name “Crockroaxz” and is also known as the “The King of Slow Motion.”

Raghav Juyal was born on Wednesday, 10 July 1991 (age 30 years; as of 2021) in Dehradun, Uttarakhand. His zodiac sign is Cancer. Raghav did his primary and secondary education at the Doon International School, Dehradun. Later, he got himself enrolled at the D.A.V. College Dehradun to pursue a Bachelors degree in commerce. [1] He had an interest in dancing since childhood, and used to participate in various dance competitions held in the city and has won a number of prizes.

Raghav Juyal was born in a Garhwali family of Dehradun, Uttarakhand. [2] His father, Deepak Juyal, is an advocate, and his mother, Alka Bakshi Juyal, is a homemaker. He has a younger sibling, Yashasvi Juyal, who is a filmmaker by profession.

Raghav Juyal with his brother

Raghav Juyal began his dancing career in 2011 with Colors TV’s dance reality show ‘Chak Dhoom Dhoom 2 – Team Challenge!!’ judges by Mallika Sherawat, Terence Lewis, and Javed Jaffrey. He participated as a team member of the D-Maniax dance crew with other team members including Tapan Tiwari, Chander Neutron, Manoj Proton, and Akshit Juyal. The team performed well throughout the show and Raghav also got popularity for his unique dance style. Next, in 2012, he appeared as a captain for the dance show ‘DID L’il Masters 2.’ The Zee TV show was judged by Master Geeta Kapur and Master Marzi Pestonji, and had a total of 4 teams which were Prince ke Paltan, Raghav ke Rockstars, Kruti ke Krackers and Neerav ke Ninjas, with 5 contestants in each team. Soumya Rai, Rohan Parkale, Om Chetri, Jeet Das, and Tanay Malhara were mentored by Raghav Juyal during the show.

Following ‘DID L’il Masters 2,’ Raghav Juyal became a part of ‘Dance ke Superkids- Battle of the Baaps.’ The show presented contestants from the first two seasons to compete against each other. The Jay Bhanushali and Shreya Acharya hosted show had Geeta Kapur, Farah Khan and Marzi Pestonji as the judges for the show. Kruti Mahesh and Prince Gupta were the choreographers for the second season team of DID L’il Masters 2, Team Yahoo. Raghav Juyal led team Yahoo having Faisal Khan, Soumya Rai, Rohan Parkale, Om Chetri, Jeet Das, Shalini Moitra and Tanay Malhara emerged as the winner of the show.

Raghav Juyal rose to fame after appearing on Zee TV’s reality dance show ‘Dance India Dance Season 3.’ He auditioned for the show performing a slow-motion dancing style and managed to impress the judges Remo D’Souza, Terence Lewis, and Geeta Kapur. Raghav, after clearing some rounds reached the mega audition where he was not selected in the Top 18 by the Grand Master Mithun Chakraborty. However, the choreographer, Terence Lewis, who was one of the judges on the show liked his performance and offered him a job to assist him in teaching dance to his team, Terence Ki Toli. Later, he was again brought back to the show on public demand after his audition video went viral on the internet and the audience demanded him to be a contestant in the show. Raghav Juyal did not let this opportunity go in vain and proved his dancing skills to the judges and the audience of the show. He qualified in every round of the competition and was declared the Second runner up during the finale of the show.

After invading the field of dancing and acting, Raghav Juyal stepped into the field of television hosting. He made his hosting debut in 2015 with the dance reality show “Dance Plus.” The show had Dharmesh Yelande, Shakti Mohan, and Punit Pathak as the mentors to the contestants and Remo D’Souza as the master judge. Raghav gained immense popularity for his comic timing in the show. His short comedy videos received a number of views on the internet. Thereafter, he has hosted a number of television shows like Dance Plus 2, Dance Champions, Dance Plus (season 3), Rising Star, Dance Plus (season 4), Dil Hai Hindustani (season 2), and Dance Deewane season 3.

Raghav Juyal made his acting debut in 2014 with the Bollywood film ‘Sonali Cable’ opposite Rhea Chakraborty and Ali Fazal. Raghav portrayed the character of Sada, an internet cable shop owner and brother of Sonali. The film showcased some of Raghav’s dances here and there. His acting in the film was highly appreciated by the critics.

Raghav Juyal with Rhea Chakraborty during the promotions of Sonali Cable

He then appeared in Remo D’Souza directed dance film “ABCD 2” wherein he played the character named Raghav, and gained huge popularity for his role. He, then, went on to star in films like “Nawabzaade” as Karan, “Street Dancer 3D” as Poddy, “Bahut Hua Samman” as Bony.

Raghav Juyal, who is known for having a great sense of humour and excellent comic timing decided to experiment with his existing image and play a dark character in Zee5’s crime thriller web series “Abhay 2,” directed by Ken Ghosh. Raghav appeared on screen playing the character of Samar, a villain, opposite Kunal Khemu, Asha Negi, Ram Kapoor, and Chunky Pandey.  Raghav Juyal, when asked about breaking the stereotype of being a chocolate boy and choosing a negative role, said

I said yes the very first time the script was narrated to me because it was so exciting. It is a very interesting, challenging and risky character. I took emotional risks to play the character. It gave me a chance to explore new sides of mine. As an actor, I am taking a risk too because this is the first time people will see a playful, prankster Raghav turning into an antagonist. The character has so many layers in him. My character had a traumatic past, which is why he does what he does. (By playing the part) I got to learn so much.”

Raghav responded to his hater by posting a picture on his social media account explaining the reason behind him not sitting on the ground. 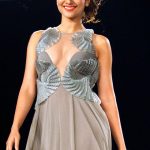