Sumona Chakravarti is an Indian actress and comedian. She gained immense popularity with the Hindi TV comedy show ‘Comedy Nights with Kapil’ (2013) in which she played the character of Manju Sharma.

In 1997, she shifted from Lucknow to Mumbai with her parents. She did her schooling at Red Hill School, Lucknow, Uttar Pradesh, and Loreto Convent Intermediate College, Lucknow, Uttar Pradesh. After completing her class 10, she attended Jai Hind College, Mumbai and did her class 11 and class 12 in arts. She then pursued a Bachelor of Arts (BA) in Economics from Jai Hind College, Mumbai.

Sumona Chakravarti with her parents

Sumona Chakravarti with her brother

She was rumoured to be in a relationship with the Indian television actor Gaurav Chopra in 2014. Later, Sumona and Gaurav denied the rumours. Sumona said,

Well, I have two-three very good male friends. Ram (Kapoor) and Jai (Kalra) are married and Gaurav is not, so people try to link us up. Yes, we hang out at parties or at events, but I have been single for the last seven years.”

There is absolutely nothing going on between us. We are friends. We just happened to meet at the film screening, that’s all. Moreover, there isn’t such a possibility (of a link-up) as there are other people in our lives. I’ve met someone recently and it’s nice. We are both glad to be together. There is a right time for everything and this isn’t the right time (to announce her name).”

As of 2022, she has shared various pictures with Dushyant Singh on her Instagram account hinting towards her relationship with him.

She started working as a child actor at the age of 11 in the Hindi film ‘Mann’ (1999) in which she played the role of Neha.

In 2010, she appeared in the Hindi film ‘Aakhari Decision’ as Mansee.

In 2012, she appeared in a few episodes of the TV comedy show ‘Kahani Comedy Circus Ki’ as the partner of the Indian comedian Kapil Sharma. She was then roped in another TV comedy show ‘Comedy Nights with Kapil’ as Kapil Sharma’s wife Manju, and she gained immense popularity with her character.

Apart from TV serials and films, she has also performed in various theatre plays such as ‘Da Dating Truths’ (2009) and ‘The Relationship Agreement’ (2016).

Sumona Chakravarti in The Relationship Agreement’ (2016)

She has worked as a model for various print advertisements like Jaanvi Fashion and Hunar Designs.

Sumona Chakravarti in a print advertisement as a model

She has also appeared in a TV commercial for Honda car along with the Indian comedian Kapil Sharma.

Sumona Chakravarti in a TV commercial of Honda car 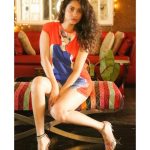 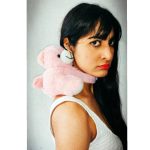