Deepti Tuli is an Indian singer who is popular for being the wife of actor and comedian Balraj Syal.

Deepti Tuli is an Indian singer who is popular for being the wife of actor and comedian Balraj Syal.

Deepti Tuli was born on Tuesday, 30 May 1989 (age 32 years; as of 2021) in Jalandhar, Punjab, India. Her zodiac sign is Gemini. She attended A.N. Gurral Memorial High School, Jalandhar. Later, she got herself enrolled at Guru Nanak Dev University, Amritsar, Punjab to pursue her higher education.

Deepti Tuli belongs to a middle-class Punjabi family from Jalandhar, Punjab, India. Her father’s name is Lovely Sanjeev Tuli who is a businessman by profession and her mother, Manju Tuli, is a homemaker.

Deepti Tuli with her mother and sister

Deepti Tuli  is married to actor and comedian Balraj Syal. The wedding ceremony took place on 7 August 2020 in Jalandhar, Punjab, India. The couple hosted a private ceremony with the presence of just only 30 guests.

When Balraj Syal was asked what was it about Deepti that he decided to tie the knot with her, Balraj replied,

It was an easy decision for me. She understands my silence, and the way she took care of me when I fell ill on my birthday sealed the deal for me. Well time will tell if it was a right decision (laughs). Honestly, when I saw her, I felt I should get married to her. She is very understanding and knows my heart sayings before I can speak out. Also, when I introduced Deepti to my family, they also fell in love with her. I think I don’t deserve such a nice girl. Hence, before other boys had a chance post the pandemic, I took the opportunity to get married.”

Deepti’s husband credits her wife for am impact on his life. He said,

Earlier, I used to behave or do what I felt like doing, but now, my wife Deepti guides me what to do and what not to. She tells me what can go against me and what are the things that will help me be a better person. Life has changed but it has changed for good. It has become better. I feel there would have not been a better time to get married. For us (artists), when we decide to get married generally we have to take a break for the wedding preparations and to spend time with our partner. But because of the pandemic, we were already on break and we did not have to take any holiday.”

On 12 October 2020, the couple releases a song called Maahi through the YouTube channel Realise Music. Deepti contributed her voice to the song, which was created by Oye Kunaal. Deepti and Balraj’s wedding footage was used in the video for ‘song,’ which was published by Balraj’s own company Realise Music. The reason behind releasing the song along with their wedding video was that their families, friends and fans, who didn’t get an opportunity to take part in their wedding rituals due to the pandemic could get a chance to see a glimpse of their marriage.

Deepti first met Balraj at an event in 2016, and instantly felt a connection. Balraj proposed to her in January 2021 after spending hours chatting to her and feeling she was the one. She, on the other hand, took her time accepting his proposal. Talking about his connection with Deepti. her now husband said,

I went to shoot for Fear Factor: ‘Khatron Ke Khiladi’ and kept texting her, but didn’t get a desired response. It was during my trip to Turkey and Greece that we started having long conversations. I met her a couple of times after I returned, and proposed marriage to her on my birthday (January 26), during a getaway in Goa. She was taken by surprise and didn’t respond immediately.”

Deepti Tuli began her career as a vocalist, appearing in several local stage concerts and festivals. She debuted as a contestant on StarPlus’s singing competition series show “India’s Raw Star.” Yo Yo Honey Singh and Himesh Reshammiya were the judges at the show. Deepti’s singing quality mesmerized the judges and the audience of the show, and she earned huge popularity for it. She has also starred in several YouTube music videos, including “Kite Door” and “Shukar Kar.”

In 2022, Deepti Tuli along with her husband Balraj Syal became part of Star Plus’ reality game show ‘Smart Jodi.’ The program features 10 real life married celebrity couples including Neil Bhatt and Aishwarya Sharma, Ankita Lokhande and Vicky Jain, Gaurav Taneja and Ritu Rathee, Arjun Bijlani and Neha Swami, and Rahul Mahajan and Natalie Mahajan, and showcases these couples performing in different events and qualifying the rounds to earn the title of “Smart Jodi.” The show not only sees contestants doing tasks but also reveals details about their personal life on national television. Deepti Tuli and Balraj Syal shared the same screen with this realtiy show. When asked about their experience of working together at the same project, Deepti’s husband replied,

When you are working alone, the difficulties you face in the shoots are managed by you but when you see your loved ones facing issues you feel bad. If the shoots are hectic there have been times I skipped my meals but it’s sad to see my wife skipping meals. The reason why I have told the staff to make sure she eats on time. I’m sure she will learn everything soon. I am one of those people who live in the moment. I never preplan anything. I always share things that come to my mind. If there are some untold stories that I have not shared with my wife till now, I have no problem sharing them with her when I am on stage. People will get to know me better through these stories. I don’t see any harm in sharing your thoughts, disappointments much like your achievements.” 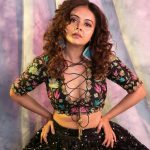